Nick Egberts
Rotterdam
a Dutch freelance fantasy and sci-fi illustrator who has just started out. A real nice guy who loves paint, as evidenced by the smears of arylic on his face, and under his finger nails. He also seems to paint digitally a lot these days. His mum would describe him as easygoing and easily excited, a bit like a Labrador Pup really. His wife probably agrees. He is interested in all things geeky, musicals, overgrown derelict buildings and the zoo. you'd probably like him...

Nick on the Net

Hello and welcome stranger,
Sometimes its hard to be productive. Last Monday I spent half a working day figuring out how to make an animated gif, so I can make my deviantart avatar blink... yes very useful, and time well spent indeed. You can impressed by all the blinking glory on my DA page. I also finshed this: 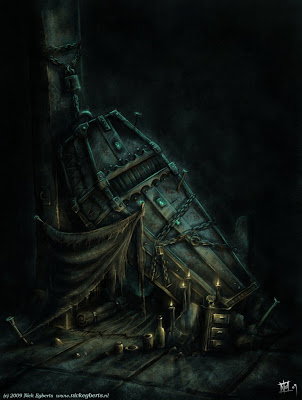 of which I am quite fond. I also finished this: 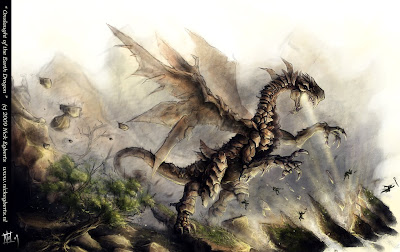 Currently though i am working on some Black n White stuff for my friends at Telsukita.
Its a great fanzine, from Spain. Normally I am not to big on working for fanzines, but my folio desperately needed some bnw pieces, and they are mates, so what can you do? Expect these in a month or so when the mag is printed.

Also working on the 2.0 version of my website, but its slow going. Webdesign was never my forté.

Posted by Nick Egberts at 12:37 No comments:


As some of you have complained I have stopped updating the old blog, rest assured though weekly blogging will be comencing relatively soon. Basically Blogger and I dont see eye to eye on the matter of pictures. I cant seem to upload any clickable ones. Sure I can hyperlink and all that, but not clickable thumnails essentially. Unless I can figure it out soon, ill move this blog to an other provider (since showing of illos is sortof important to an artist..).

-I've entered the Artorder Vampire bnw contest, which was a great refresher in my Pen n Ink skills check out the result here
-I've entered the Artorder Earthquake Dragon contest, which resulted in some great feedback. Check out the result here
-I've entered the Artorder Drow vs Mindflayer Cover contest, the jury is still out on that one, but I face some serious competition. I am updating the piece to fit in my folio, but check out the version I entered here
-I am toying with Deviant Art's new portfolio option, check it out here
-I finally received some price enquiries from a couple of companies, one a pretty sizeable contender. Hope it all works out, I am enthused as hell.
-Finished a couple of personal comissions, brought in some nice bucks. I'll upload 'em when I have the time, al in traditional media, so they need a 'lil digital love, before they are presentable.
-Started a semi-weekly sketchbook on my DA page, finished two so far check em out here


see all of you nice folks next week ;-) 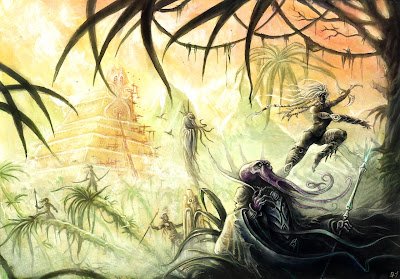 all images in this blog are (c)2005-2009 Nick Egberts unless noted specifcally otherwise.
Posted by Nick Egberts at 19:00 No comments:

You know, writing e-mails is pretty hard work in my humble opinion, well enquiry e-mails at least. I have inmense trouble with gauging how i come across in text. Certainly because of the language barrier (i hail from the Netherlands). I like to think i can hold up a decent conversation in English, I also worked in the UK for a stint, which helps, but with written communication you just never know. With converstations, you can check people's bodylanguage for understanding and their pitch for their general mood. Maybe i should invest in a course in written English or something.
What is also causing me slight trouble is the fact that i am still unpublished, and quite unsure to try and hide it, or mention it clear in the initial email traffic. My gut feeling is stating it loud n clear, but when putting such bold thoughts to digital paper, It always seems to come out wrong. To AD's (or artists) reading this: any pointers are greatly apreciated. My own pointer to starting artists: Never send out emails at 2 am, tired over enthusiastic artist make stupid mistakes. I made a very emberassing one, that may well haunt me for a couple of years.

You'll be pleased to know that the ranting stops from this point onwards:

I have put some projects on hold (dont worry if you are a paying client this wont affect yoursI have far to little of you to start cancelling on ye) to practice my hybrid skills. Like I yapped about before, combining acryllic/watercolou paintings with digital overpainting seems to really be my schtick. The eventual goal is to create a method of painting that I am comfortable with, has the smoothness to apeal to a widerange of audiances but the texture and weight of a traditional painting. In effect using photoshop to speed up the difficlut elements of my beloved acrylic paintings.
Pictured below is a new version of a painting I did two years before, and below that it´s previous incarnation. 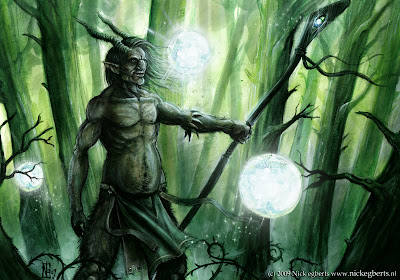 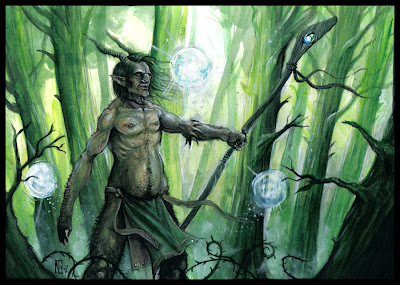 Various elements have changed as ye can see. I fixed the right arm becuase it looked like a club, I also changed the size and rendering of the wisps, mixing up the sizes to create more depth. This ofcourse has nothing to do with digital painting, I should have gotten it right the first time round. The lighting has become a whole lot more dramatic ofcourse, something i feel I can achieve a whole lot faster and better in photoshop. As a quick test it was more effective than I initially expected... I expect more tests like these in the future. Have to give a shout out to Ralph Horsley, I really like his aproach to acrylic painting, enough that I must be careful not to copy him...

I also talked about emulating Keith Thompson´s style as practice. This is the result: 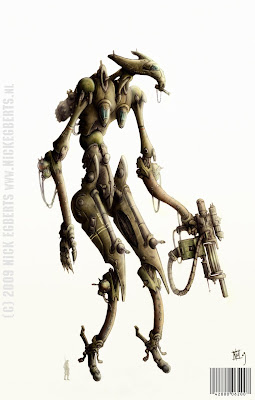 I dont like the resulting rendering too much. I did learn quite a few things about layers, and what you can achieve with areally tight pencil phase, as opposed to my customary loose scribbles. I did like the design of the bot, something I would have scrapped as too odd, if I never came across Keith´s work. He truly demonstrates the beauty of odd designs.
I have one last self plug. I plan to something for this compo. Hope I can get it finished. So if you are a member of the Conceptart.org community, and you like my entry, why not vote for me?

catch you all next time.
Cheers,
Nick
p.s. Never the one to indulge in self promotion: Nick Egberts is looking for new clients. You can find samples of his work on http://www.nickegberts.nl/ and http://mr-nick.deviantart.com/ . If you are interested feel free to send him an email at info@nickegberts.nl
all images in this blog are (c)2005-2009 Nick Egberts unless noted specifcally otherwise.
Posted by Nick Egberts at 18:16 3 comments:

Well I am back, Edinburgh was, well, awesome. We stayed at a hotel on Waterloo Place, which right beside Old Town and within striking distance of the cities manyfold tourist sights which include: a vulcano in the center of the town, underground tunnels/ruins, a plethora of churches and some creepy graveyards... All in all very inspiring.
-
I have finished some more artorder contest pieces. I am going to take a small break from the compos for a small comission, and because I am busy wrapping up the paperwork side of starting up a business. Also I shall start a second marketing push, and I shall be sending many e-mails to unsuspecting (and a couple of suspecting) Art Directors (this is a subliminal message: hire Nick hire Nick hire Nick.). What was that? I dont know what you mean..... Hire nick 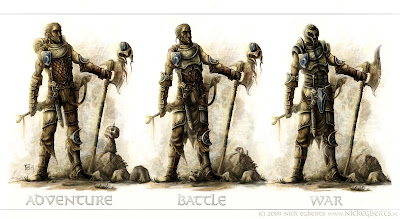 Still busy on the big piece, I talked about a couple of weeks ago. Almost ready to share some tasters with you guys. I am also busy studying the art of Keith Thompson. Visionary stuff, and his method seems very efficient, and is widely documented in a wide range of articles, dvd's and books.
-
all images in this blog are (c)2005-2009 Nick Egberts unless noted specifcally otherwise.

Sorry for the lack of updates these last two weeks. Your going to have to wait tad longer unfortunately I am of for a nice holiday to Edinburgh till next saturday.

Posted by Nick Egberts at 13:51 No comments:

The results of the Boll Deevil contest are in! I entered this: 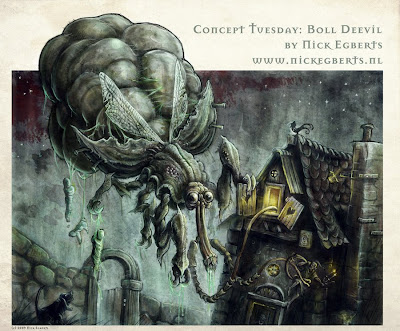 There was definately some fierce competition, a lot of industry veterans as some young guns (like me). Instead being mercilessy gunned down by the big guns, I fared better then I expected!
I got in to the honorable mentions (basically in the last 8, out of 52 entries), and they had this to
say:

Nick Egberts - Everyone loved the humorous "horror" image. Gotta love the
expression on the Boll Deevil! Voted "Most Likely to win a Children's Book
Award"

I was well pleased with the end result, though the text Jon wrote got me wondering. I did approach the giant bug subject with a touch of mirth (the encapsulated dog and sleeping gown) and I always regarded my own style as stylised, textured, a bit whimsical perhaps, and quite detailed. I never tought "children's book suitable" though. I am sure a children's book publisher would never print said piece (in holland we might, we are quite odd), there is certainly a lesson to be learned here. People (and certainly AD's) look art a painting quite differently than it's maker does. I thought I already learned this, but the extent of it surprised me.

I need to keep this mind during my next project. It's gonna be a huge battle scene where five protagonists square off against a load of undead, while the sun is setting. i'll do it fully in photoshop, and its going to be about 14''x40". The idea is that it is supposed to be the crown to my sword n sorcery portfolio, after which Ill submit my work to the lovely folks at Wizard. I would be great if they were my first real clients. I dont believe in this hokey of starting with small €10,- gigs and slowly worming my way to the top. Drive and determination should prove just as useful!

That's all the self indulgent babble of the day folks, catch you all next week.

p.s. If you have the time check out the artorder blog next tuesday (about noon Pacific time)for the results of the next concept compo.

In previous installments talked about concept contests, well I finshed another piece for the Artorder Blog: 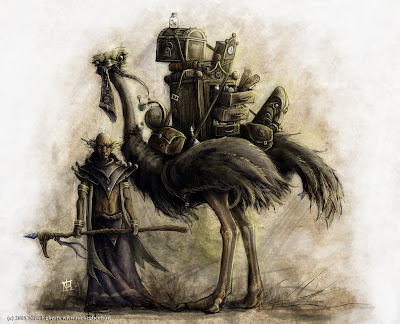 I finished this in about one work day. Very fast, for me at least. I've spent a couple of days in the country (Limburg, a (the only) hilly region of the Netherlands), which gave me tonnes of inspiration and motivation.. Illustrators spend a lot of time inside, and it easy to forget the energy the outdoors can bring.

Its 2009 people, its high time that we get affordable tablet laptops with a 20 hour batteries. Its bad enough that we dont have laser guns or flying cars....

Thats it for today, I am off enjoying the last bits of my dayjob holiday...

all images in this blog are (c)2005-2009 Nick Egberts unless noted specifcally otherwise.
Posted by Nick Egberts at 17:45 No comments: